November 11, 2010, I heard the words every patient diagnosed with cancer wants to hear: “There’s No Evidence of Disease!” Those amazing words were uttered by the same surgeon who had to inform me I had Stage IV Head and Neck cancer in April 2010. Dr. David Cognetti and I have been able to share many milestones together along the way since 2010 including our joint service for the National Institute of Health’s Head and Neck Steering Committee, a Haiti Mission Trip, the 2020 Head and Neck Cancer Symposium and Dr. Cognetti’s recent promotion to Chairperson of the Department of Otolaryngology, but most importantly family outings to the annual Villanova University/Georgetown University basketball game in Philadelphia. A lifelong friendship was born out of a horrible cancer diagnosis. I am beyond grateful to share that same bond with many members of the Jefferson Health Department of Otolaryngology, Medical Oncology and Infusion Center & Jefferson Radiation Oncology at Sidney Kimmel Cancer Center.

Dr. Cognetti and the entire team have also played a critical role in supporting David’s Dream & Believe Cancer Foundation over the past 10 years. We share something else incredibly special beyond our friendships. It is a shared vision and commitment to improve the lives of patients and their families from the moment of a cancer diagnosis. Our Foundation recently gifted a financial contribution to the Department of Otolaryngology at Jefferson to establish the David’s Dream & Believe Cancer Foundation Patient Support Fund. The goal of the fund is to provide a life preserver to patients facing overwhelming financial burdens. We are grateful for this partnership and that the mission of DDBCF has been adopted for this fund.

It has always been about patients and their families, and this partnership will allow us to continue to serve New Jersey residents as they receive cancer care in Pennsylvania. 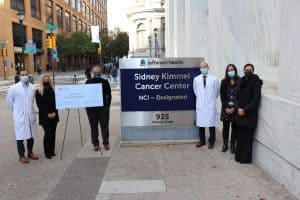 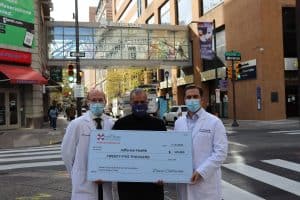 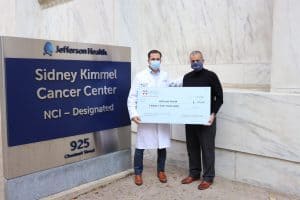 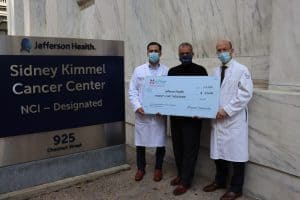 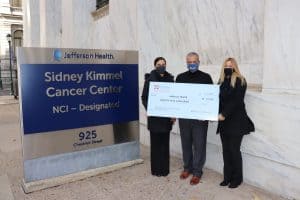 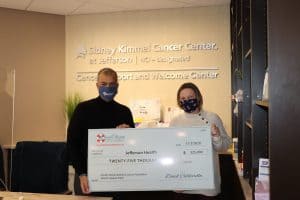 We are proud to partner with the Head & Neck Cancer Alliance and the American Head & Neck Society on a Survivorship Series for individuals and families affected by oral, head & neck cancers.

In early 2019, CoFounder & Stage IV Head & Neck Cancer Survivor David Caldarella of David’s Dream and Believe Cancer Foundation was nominated to serve on the 2020 National Head and Neck Cancer Symposium by Dr. David Cognetti of Jefferson Health. He was selected to serve, and worked behind the scenes with the committee on the symposium, which was set to take place this month in Chicago. As a result of coronavirus, the partner organizations pivoted to create a virtual gathering open to participants throughout the country.

The final webinar in the series, “How to Be A Survivor Champion,” will take place on Wednesday August 19, 2020 at 4:30pm. Deadline is Friday August 14th at 10am. If you or your family are interested in learning more about life after a diagnosis, we encourage you to attend.

On November 15, 2016, I attended a presentation at Thomas Jefferson University Hospital (TJUH), where my surgeon Dr. David Cognetti and his colleagues Dr. Joseph Curry and Dr. Adam Luginbuhl spoke about several topics including the Complex Head and Neck Care and Education (CHANCE) mission trip to Haiti. Jefferson has one of the top ranked Ear, Nose and Throat (ENT) programs in the United States, and they believe this care should not be limited to those who can travel to Philadelphia. Through the CHANCE mission trip to Haiti, they’re able to expand their impact and give individuals suffering from a complex thyroid disease or head injury a better chance of surviving. Haiti is the poorest country in the Western Hemisphere and were still digging out from the earthquake of 2010 that killed at least 200,000 when Hurricane Matthew hit in October 2016 killing an additional 600+. Still today, nearly a million people are looking for food and drinkable water every day.

Jefferson team members have partnered with skilled Haitian doctors for the past two years to provide 150 Haitians with care, hope and a chance at Hospital Lumiere in Bonne Finne and St. Luke’s Hospital in Port-Au-Prince.  The Jefferson team members also connect with Haitian people locally, attending mass and seeing how their spirits are lifted through songs and prayer. Dr. David M. Cognetti, M.D., FACS, Co-Director, Jefferson Center for Head and Neck Surgery, and Associate Professor, Department of Otolaryngology- Head & Neck Surgery at Sidney Kimmel Medical College at Thomas Jefferson University; offered the following comments in a recent interview about the upcoming trip. “Jefferson’s CHANCE foundation is not only about bringing medical care to Haiti, but also about educating the local medical professionals on how to continue the care after our visits.  When Jefferson was looking for a volunteer to provide a patient’s perspective, David Caldarella immediately came to mind. Not only has he experienced head and neck surgery firsthand, but, as a lifelong resident of Long Beach Island, he has also witnessed the devastating effects a Hurricane can have on a community.”

I’m blessed to be a dear friend and former patient of Dr. Cognetti’s and now a volunteer at TJUH. The invitation to accompany Jefferson’s amazing team on a 4-day mission trip to Haiti leaving Sunday January 22nd, is an opportunity of a lifetime. I will serve in a support role for the team and interact as a patient advocate to the families of patients through local interpreters. Overall Patient Support is of utmost importance to all of us at David’s Dream & Believe Cancer Foundation and being able to watch and learn directly from the care providers at Jefferson and staff in Haiti will afford me the opportunity to bring those valuable techniques home to current and future patients of DDBCF. My friend of 25 years and respected photographer Michael John Murphy has also been invited to join us on the mission to visually capture many impactful moments. It is truly an honor to have been invited by the Jefferson team to join this Haiti mission trip and to share a common goal in serving as “A Beacon of Hope” that shines beyond our borders and out into the global community!

CHANCE Complex Head and Neck Care and Education David's Dream & Believe Cancer Foundation DDBCF Dr. Adam Luginbuhl Dr. David Cognetti Dr. Joseph Curry Haiti Hospital Lumiere Michael John Murphy Mission Trip St. Luke Foundation for Haiti St. Luke's Hospital Thomas Jefferson University Hospital TJUH
A Note From David Caldarella, Co-Founder & Executive Director:
I was humbled and honored to hear that I was selected as 1 of 4 finalists for the 2015 Hero of Hope Award by the Academy of Oncology Nurse & Patient Navigators. This nomination is very special because it emanates from Oncology Nurses and Patient Navigators who recognized the critical work and mission of David’s Dream & Believe Cancer Foundation. In particular, Elizabeth Martinez from Southern Ocean Medical Center who nominated me and who should be nominated herself! It’s very difficult to hear life and death struggles everyday but it’s a special person that rises above to help. Oncology nurses and patient navigators do that on a daily basis so to be recognized by that same group of amazing individuals is truly overwhelming! The recognition of being nominated is a confirmation for our Board of Directors, Sponsors, Individual Donors and Volunteers that we are making a difference in the lives of our families battling a cancer diagnosis.
VOTE for David at CONQUER Magazine!
FOR IMMEDIATE RELEASE
Long Beach Island Resident One of Four
Nominees for National Survivorship Award

LONG BEACH ISLAND – A Long Beach Island man has been named one of four nominees nationwide for the Hero of Hope Patient Award given by the Academy of Oncology Nurse & Patient Navigators (AONN+).

David Caldarella was diagnosed with head and neck cancer in April 2010. He learned his cancer was extremely aggressive and had already metastasized from his tonsils to the lymph nodes on the right side of his neck and down his throat.

“The news was upsetting on a number of levels,” says Caldarella. “I was in the best shape of my life and had never smoked. Beyond the physical, it hit me emotionally, socially, and financially. It literally changed my life.”

The next month he underwent a tonsillectomy and biopsy, a right neck dissection and transoral robotic surgery to remove the remaining tonsil and tumor. Chemo and radiation quickly followed.

“What got me through this was my family, friends, faith, the kindness of strangers, and the desire to create a legacy that would benefit others and make my nephew and nieces proud.”

“I thought about the foundation constantly,” he says. “It would be 2 or 3 in the morning, and I would be trying to figure out how we would fund it, who we would help, and what it is we would do.”

In November 2010, Caldarella received the “all clear” from his surgeon and spent the next two years growing his foundation, which required overseeing four annual fundraising events.

“By 2013, we reached a breaking point,” he explains. “We surpassed our initial goal to help one or two families a year almost immediately. By the time I went full-time and became a salaried employee of the foundation in 2014, we were helping more than 100 people from across New Jersey annually.”

To date, David’s Dream & Believe Cancer Foundation has helped 400 families and has given more than $400,000 in assistance.

As one of the nominees for the Hero of Hope Patient Award, Caldarella’s story will be featured in the August issue of CONQUER: The Patient Voice Magazine.

Voting to select the winner is now open. The winner of the Hero of Hope Patient Award will be announced in early October at AONN’s sixth annual Navigation and Survivorship Conference in Atlanta. The winner will receive a plaque recognizing his/her contributions to the cancer community as well as a donation of $1,000 made to the charity of his/her choice.

About the Academy of Oncology Nurse & Patient Navigators
The Academy of Oncology Nurse & Patient Navigators, Inc. (AONN+) is the largest national specialty organization dedicated to improving patient care and quality of life by defining, enhancing, and promoting the role of oncology nurse and patient navigators. The organization, which has more than 5,000 members, was founded in 2009 to provide a network for all professionals involved and interested in patient navigation and survivorship care services in order to better manage the complexities of the cancer treatment process. For more information visit www.aonnonline.org.About CONQUER: The Patient Voice Magazine:
CONQUER is the Academy of Oncology Nurse & Patient Navigators’ (AONN+) premier forum for patients with cancer. CONQUER features articles written by and for patients with cancer, survivors, nurse navigators, and other oncology team members. This magazine addresses the issues that patients, their family members, and caregivers face every day in an easy-to-read format. Issues include interviews with patients with cancer, information on access to care, and articles on lifestyle topics such as nutrition, stress management, personal finance, and legal and employer issues. CONQUER also features patient stories that are nominated for the AONN+ HERO OF HOPETM award, which will be presented at the AONN+ Annual Conference. All stories are compiled in a special issue of CONQUER at the end of the year. For more information visit  www.conquer-magazine.com.

David’s Dream and Believe Cancer Foundation is a 501(c)(3) nonprofit that raises funds to provide financial assistance and services to families primarily in New Jersey affected by a cancer diagnosis.  David Caldarella, Co-Founder and Stage IV cancer survivor, established David’s Dream and Believe Cancer Foundation in 2010.  His journey of living through Stage IV cancer inspired him to dedicate his life to helping other individuals, affected by a cancer diagnosis.  David spends most of his time being with these families and has been an amazing support person in all their lives.  To date, the Foundation has assisted 325 patients in 4 years, and donated over $300,000 to families afflicted by cancer.  Donations are used towards a multitude of services for the family battling a cancer diagnosis including financial assistance for medications, treatments, transportation, rent, mortgage and utility bills.