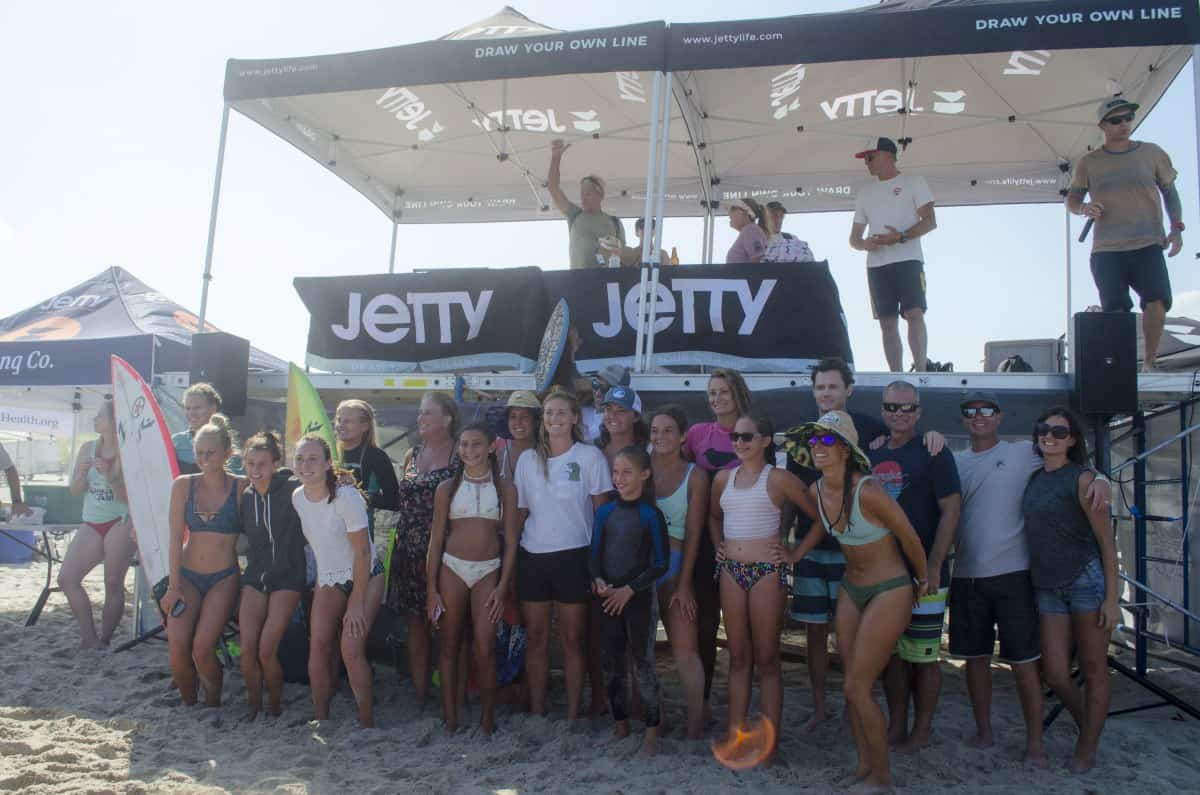 We couldn’t be prouder of our community and all the people, sponsors & surfers involved in this year’s 11th Annual Jetty Coquina Jam to benefit David’s Dream & Believe Cancer Foundation. The all-female surfing competition raised over $37K for New Jersey females affected by cancer diagnosis!

Under sunny skies and blanketed by a wave of smiles and stoke, the largest surf contest that Long Beach Island has ever seen ran from 8am to 5pm on the beach at 68th Street in the Brant Beach section of Long Beach Township . A never-ending line of sponsor tents stretched in both directions, stemming from the Jetty pop up and judge’s scaffold. Massages, yoga, hair braiding, snacks, a beach bar presented by K2 (Kubel’s Too) and food from Bird & Betty’s kept the crowd relaxed but buzzing all day. Hackensack Meridian Health – Southern Ocean Medical Center, the event’s Title Sponsor supported the community event for its second consecutive year. Circling back to the ethos of the event, Rhode Island surfer Katie Imswiler and partner Mia Gallagher edged out LBI local Mary Tantillo and Brynn Gallagher in the finals. Imswiler & Tantillo, both sponsors of the event (IMSY and Swell Colors Glass Studio; respectively), set the tone for their younger counterparts (sisters from Ocean City, NJ) who ripped the disorganized afternoon waves as impressive up-and-comers.

The highlight of our day was watching Sophie Beyer, the inaugural recipient of our DDBCF Scholarship, prioritize her partner’s first Coquina Jam experience over the potential of moving on to the semi-finals. When nine-year old Isla Carvajal was fighting her way through the disorganized waves, Sophie stayed in the shore break to encourage her rather then moving back into the lineup to score points. This gesture exemplifies exactly what Coquina Jam is all about!

The Coquina Jam Committee, led by Jetty CEO Jeremy DeFilippis, prepared for its 11th Annual Coquina Jam knowing that it had the potential to raise a lot more than it had in previous years. The surf contest had evolved from an introductory event in 2009 that boasted 32 females competing on a Wednesday night, and donating $460 to Boarding for Breast Cancer, to its 10th Annual in 2018 with 48 competitors and a donation of $15,085.94. The latter was the event’s largest donation in ten years and brought the total amount north of $72,000, most of which was directed to DDBCF’s mission since the 3rd Annual in 2011.

This year, the expanded field of 64 surfers did much more than simply dazzle the crowd on waist-to-chest high surf on a perfect Summer Sunday. They were encouraged to raise money during the month leading up to the actual event, something that they took head on, raising over $10,000. The crowdfunding component of Coquina was suggested by DDBCF Executive Director Dani Corso, as it had worked so well for our Shave The Date fundraiser presented by Swing Graphics.  Jetty Marketing Director Joe Hodnicki then sweetened the pot by suggesting that they could acquire matching sponsors for each quadrant of surfers in the NCAA bracket-style tournament. The Tide Table Group, Farias Surf & Sport / Five 0 Six Boutique, The Wright Law Firm and Fantasy Island Amusement Park answered the bell, agreeing to match up to $2,500 each. The surfer’s goal of $10,000 was met easily, and Fantasy Island even agreed to go beyond their initial ceiling donating $4,000+. Well over $20,000 was raised before the contest even began, a figure that eclipsed any single prior year of fundraising in total! This year, Coquina Jam topped previous donation totals at $37,157.01, every cent of which was distributed to New Jersey females affected by a cancer diagnosis within one week of the event.

Thank you to all who made the 11th Annual Jetty Coquina Jam one to remember! We would not have had such an extraordinary impact without the support of every single surfer, sponsor, donor & beachgoer!