Someone To Be Proud Of | By: Mattison Clark 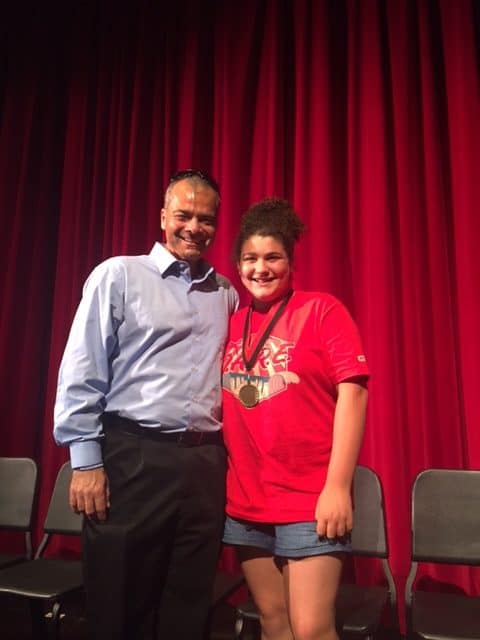 10 year old Mattison Clark is a student at Stafford Township Intermediate School and was selected to read her essay about her role model as part of the D.A.R.E program. This program is led by Officer Chris Fritz from Stafford Township Police Department. Mattison has been a member of David’s Dream & Believe Cancer Foundation’s youth group Generation Dream since its’ inception. Matty’s mom Renee was joined by Board of Director members Kim McCabe Manzella, Dani Corso and Co-Founder David Caldarella who was the subject of Matty’s essay. Below is the text from Matty’s essay and we just want everybody to know that Mattison has a beautiful soul and we know she will accomplish great things in the future! We love you Matty!

“Close your eyes and think of your perfect role model. Maybe he is famous, maybe he is strong, brave, caring, sincere and all around who you would see as a great role model. To me it is funny how people sometimes overlook those who can be great role models because they aren’t famous. Most people choose family members as their role model. My role model is a man special to me that is not my family, but he feels like it. His name is David and if you went out and asked the world who David Caldarella is the people of Manahawkin, New Jersey would know him. David runs David’s Dream & Believe Cancer Foundation. David is my role model for so many different reasons. He is inspiring, kind, and strong mentally and physically. David will always be my role model, because even though he isn’t famous he is the best man I know.

To Start off, David was just any ordinary man until cancer struck. David battled stage four squamous cell carcinoma(car-see-no-ma) and had a 5% chance to live. On November 11th, 2010, David Caldarella became a stage four cancer survivor. David then created a foundation for families in the local radius of Long Beach Island to around Tuckerton. He fundraises to provide patients with the things they need. He has inspired me to be a better person and help people. I volunteer for his Foundation and if it wasn’t for him I wouldn’t be who I am today. David leads his life with happiness to be in this world and spreads inspiration everywhere.

Moving on, as I said David battled cancer. As David was in the hospital being sick and facing the possibility of death, he was thinking about other people like him trying to survive this horrible part of their life. David’s story got to the public and he had strangers visiting him just because they heard his story and wanted to be the smile that lit up his day. David had so many people care about him and thought, when I get out of the hospital I will care for people like me. Being part of the Foundation I’ve heard his story a million times. I’m not tired of it, actually to this very day his story gets me very time and makes me grateful for what I have. David created David’s Dream out of the kindness of his heart. The same kindness lead me to help raise money, make meals, give toys, and care for everybody. I wouldn’t be who I am without David’s inspiration.

Lastly, I’ve had so many people in my family who died of cancer. To know someone with stage four cancer and survive makes me think if he can be that strong mentally and physically, so can I. David worked through a lot of pain to get to be where he is today. David knew he was sick for about eight months. He had to do a lot of chemotherapy and surgeries. Today David stands tall, proud of the things he has accomplished, and proud to be who he is. Cancer beats your brain and body. David was probably trying to wrap his head around what was happening to him when he first found out. David didn’t sink to the calling pain of death. He stood tall in the end and is free of cancer, stronger than ever, and an amazing man doing amazing things.

In conclusion, David lives cancer free, drug free, and doesn’t abuse alcohol. David took the time he had when he was in the hospital and used it to make a great foundation that helps a lot of people. David is inspiring, kind, and strong. I couldn’t be more proud of David and I hope he sees me like that too. David is the best man I know and I know he can go even farther than he already has. David will always be my role model and nothing can change that. David is my beacon of my hope.” Mattison Clark